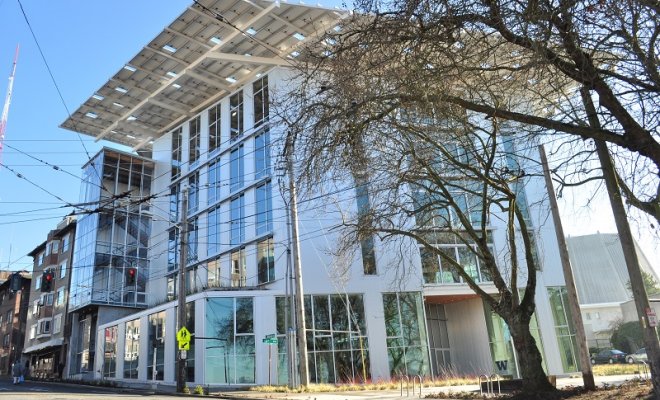 3 Amazing Buildings Around The Globe with Which You Can Fall in Love with in Seconds!

Buildings nowadays are not just a combination of concrete and cement, in fact, innovation flair has added its magic across the globe. The buildings have now become smarter, design-oriented, and an artificial person itself. Across the world, people are talking about the benefits of having a smart building at the disposal and even the research has backed that architecture of the building plays a crucial role in shaping human nature.

Following are the 3 amazing buildings in the world that have taken the attention of the world right now:

When you look at this 6000 sq feet architecture from outside, it appears to be a normal office building just like other buildings around it. However, this building was the first one to apply for Asia’s Living Building Challenge Certificate. Its structure makes it the most livable building in the Asian Continent. The uniqueness of the building is its air monitoring system which allows the employees to measure the quality of the air within the organization on their smartphones. This building has five levels of air purification system to help them breathe fresh air within these strong yet innovate walls.

This building has been awarded the title of “the greenest commercial architecture of the world”. With the invention of this amazing building, the building domain was given new goals and visions to break its own record by building a smarter, efficient, and productive structure beyond this. Well, most buildings aim at sustaining close to 40 years altogether, but this extraordinary structure has increased that bar too by attaining a lifespan of 250 years and even the ARCO Design Build aims the same. The most astonishing feature of the building is that it consumes net zero energy as 575 solar panels are installed to generate electricity. The characteristics that make it one of its kind in the world are:

The Edge: The Netherlands, Amsterdam

The edge is also the headquarters of Deloitte and is awarded the label, “The smartest Building on Earth”. The feature that makes it distinct from others is the application that measures the performance and productivity of the employees. The app knows each and every movement of the employee and then updates the information accordingly.  This building has given the working style a new edge. It has integrated information technology and artificial intelligence in a way that it balances the way we perform a task depending on the environment where it is being executed. According to a British Agency; BREEAM, this is also labeled as the greenest building in the world which has helped it to attain the highest sustainable score in the world-98.4%

The next generation smart buildings are integrating technology in such a manner that the architecture of the buildings speak for itself. From going greener to toxic free, structures are being designed by keeping the humans who are going to work inside those walls. Henceforth, from energy efficient to the enhancement of productivity is what smart builders are aiming at.