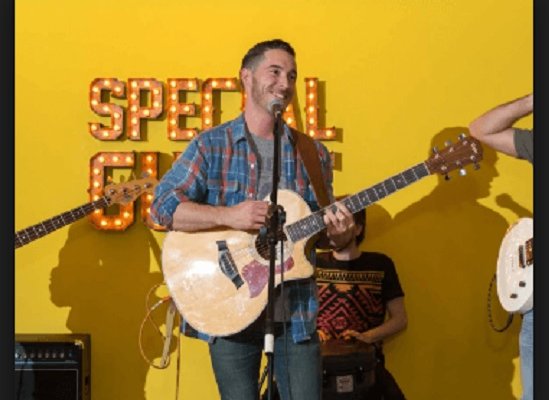 These days, it seems like there’s an app for anything and everything.  While much of the App Store is cluttered with fluff, there are some gems that stand out from the rest for being innovative, original and fresh.  Special Guest is one of those apps.

Special Guest is a talent booking app that allows talented performers to get paid to do what they love.  The app, co-founded by actor and comedian Damon Wayans Jr. and bestselling author and entrepreneur Kris Jones, allows talent to essentially manage their own careers.  I recently had the opportunity to chat with Kris and ask him a few questions about the app, working with Damon, and the secret to their successful partnership.

Special Guest is an app that bridges the gap between talented performers and the people that want to hire them.  How did that idea come about?

My partner Damon Wayans Jr. is an actor and comedian.  He also comes from an entertainer family and grew up in Hollywood.  His exposure to the entertainment industry has left him frustrated that it is so hard for most people to break into show business.  While he is fortunate to have professional representation, more than 95% of talented people don’t. Damon wanted to do something about that, so he and I joined forces to build Special Guest App, which makes it easier for talented people (comedians, musicians, dancers, actors, etc.) to get discovered and booked for paid gigs.

What were the beginning stages of developing the app like?

We started by building the basic features around finding talent and booking them.  We then put the app in the hands of talent and did two things- first, we requested as much “qualitative” feedback as possible.  Qualitative feedback is the feedback you get from users about what they like, what they don’t like, and ideas they have to improve the app.  Second, we used “quantitative” feedback to improve the app. Quantitative feedback requires an analysis of what the user actually does after they download the app.  It answers questions like where do they spend most of their time, where do they get stuck, what features do they/don’t they use, etc. This type of development model is referred to as “agile” development and it’s what we are using to build Special Guest into the ultimate talent booking app.

Was there a particular moment when you and Damon realized you were creating something amazing?

In all honesty, it felt really good from the start that we were attempting to do something really important and worthwhile.  We are both committed to helping talented people get discovered and paid to do what they love to do. We think Special Guest is the answer.  There were a bunch of times over the last 2+ years that made us both realize we were onto something big.  The first was getting selected by Will.i.am from the Black Eyed Peas as part of Apple’s original TV show “Planet of the Apps.”  About 50% of the app developers cast on the show went home without a coach. However, Will selected to work with Damon and myself and we made it to the end of the TV show and won $500,000.  The second instance that was an “OMG this is awesome” moment was when Damon was filming an interview on the Ellen Show and Ellen brought up Special Guest and how she thought it was an amazing idea- to put it lightly, that has had a dramatic effect on the success of Special Guest.

What was it like appearing on Planet of the Apps?

It was a really exciting experience, and for me it was something totally out of the ordinary.  To be fair, Damon is a TV star so he’s used to being in front of cameras and was a total pro from beginning to end.  For me, it took a little bit of getting used to as the show was “unscripted” but everyone knew what was coming next but me.  LOL. However, I realized that I was cast on the show to play myself (successful entrepreneur, app developer, etc.) and once that happened I came into my own and totally crushed it.  It didn’t hurt that I had a TV star partner giving me advice and strategizing with me throughout. It also didn’t hurt that I came to the table with nearly 20 years of entrepreneurial experience.  Damon and I have both said we are a one, two punch. On the TV show, Will.i.am refers to Damon and I as “Dr. Dre” and “Jimmy Iovine” from Beats, since Damon is the entertainer and I’m the entrepreneur.

What would you say is the biggest secret to making a business partnership like yours and Damon’s work?

Great question!  We treat each other with respect and we realize we have different backgrounds and bring different strengths to the table.  He doesn’t make me feel uncomfortable about being me and I don’t make him feel uncomfortable about him being himself. I also think we have quite a bit in common- we are family guys (family = #1), we are both high achievers and driven for success, and we both feel our best/ most successful days are ahead and the entrepreneurial side will likely happen together.

When you’re not running a million companies, what do you like to do for fun?

I love to travel, go fishing, read, drink wine, go to sporting events, and spend quality time with my family.  Ironically, despite working very hard when i’m working on many different projects, by far my #1 priority is spending time with my family.  I drop my kids off at school in the morning, i’m home by 5:30 PM every night to have dinner with family, and I take three family vacations per year in addition to all kinds of fun things in between.  And yes, I run 1,000,000 businesses…almost.